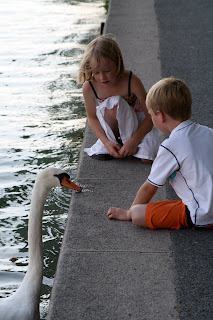 Today was a day for the ducks!  And the swans too!

Ask the kids what the best part of the day was, and I think they will mention feeding the ducks and swans.  We got a really late start leaving the Geneva area since we all still have quite a bit of jet-lag.  Patrick still was fighting off a fever but was a good sport once the ibuprofen kicked in.  We drove to Annecy, France which took just over an hour by car.  The old part of the city is lovely, just off the lake with small canals winding through.  Shortly after arriving we headed to a café-restaurant and tried the local kirs, beer, and some specialities of the Savoie region.  Heather had a delicious salmon, I had a great salade au chèvre chaud and Austin had a plate of regional cheeses and charcuterie.  Kids - well they opted for the kid menu of chicken nuggets and abundant French fries.  While we finished our meal, the kids began feeding the swans and ducks on the canal next to our restaurant.  They loved it.


The kids then begged to head over to the lake, to swim, to check out the giant slide, and maybe try out a pedal'eau with a built-in slide.  Heather and I opted for a little more window shopping and strolling around the vieille ville while Austin took the kids for their water adventure. 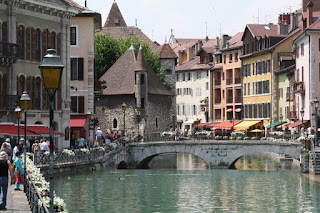 Heather and I caught up with the wet kids splashing around the edge of the chilly lake.  They tried out the pedal boats for a half hour, but found the slide less enticing because the lake is quite cold further from shore. 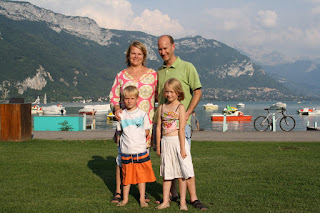 Next we headed to the beach.  Austin was going to take the kids down the big slide,  but it closed just as he was getting in line.  Our kids, who are not used to cold lakes, didn't really want to swim much, so they splashed a little bit in the kid area.


We strolled back to the old part of town, and found a place for some pizzas to share before we headed back to Crans, Switzerland.  No one could get to sleep before midnight despite trying hard!  Hopefully tomorrow will be easier!
Posted by Katy, Planet Perspectives at 12:08 PM

Sounds and looks like you are having a good time. What is wrong with Patrick? Just a little bug I hope. Your photos are wonderful. Keep us posted on the trip.
Sandy

Awesome! I have a photo framed in the family room that you took in Annecy in 1992...almost the same shot as in your blog!! It's like I was there! Enjoy the trip and have fun over the weekend. Happy Birthday on Saturday, Austin!! MOM

Awesome photos! Glad you're having fun!