After a quick trip back to the airport, Austin and I rented the car uneventfully, which was a huge relief.  By the time we returned to the village of Crans, Patrick's fever had subsided.  Sophie slept later than ever, so we work her up finally at 10:30am.  We headed along Lac Léman (Lake Geneva) up to Nyon, Suisse.  (That's not the Nyons-with-the-olives in southern France)

Nyon is a lovely medieval town overlooking the lake.  Austin needed some decent leather sandals for strolling around quaint European villages, so we did some shopping.  We paused for a little picnic next the lake with some baguettes, some other yummy bread, brie, sliced ham (why is it so much better in Europe?), salami, and some fresh cherries.  The kids walked along the stone wall, tempting the swans, ducks, and little birds with the crumbs from their baguettes.  After, we crossed the street for our first espressos of the trip which were perfect, while Heather and her friend Susanne had "des renversés," which seem to be basically "café au lait", but here in Switzerland apparently they are more likely to be called "renversé."  Booming thunder in the distance pushed cold air into town, so our stroll around Nyon was quite comfortable in the upper 70s.  At the café after lunch, Patrick became really chilly and we realized his fever was back. 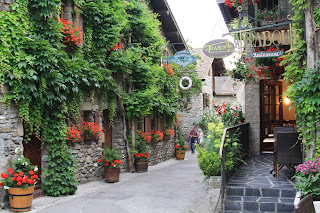 We took the boat across the lake to France, to a gorgeous little village called Yvoire.  It's not far from Evian, where, obviously, Evian water has its source.  The flowers in the window boxes are beautiful and lush, and the boutiques were charming.  The kids enjoyed dipping their hands under the flowing water at the public fountains, learning the difference between "eau potable" and "eau non-potable."  Austin and Patrick sat around on corners, since Patrick wasn't feeling too well, while the "girls" did some window shopping.  One gift was bought, for my mom.

The lightening across in Switzerland never reached us, but the rain did, just before boarding the boat to return.  This boat was a big, good-looking paddle boat, with a proper dining room and first class area.  Patrick nodded off while Austin and Sophie explored the ship.

Now Patrick is sleeping on the rug on the floor of the living room.  Sophie challenged her dad to a game of chess, Susanne is doing work on her computer and Heather is planning her vacation for southern France, not far from Carcassonne.

A simple dinner is planned, because we didn't really plan one.  Austin and I hope the Spain-Portugal game will keep us awake and alert so we can get over the jet-lag.
Posted by Katy, Planet Perspectives at 11:49 AM 1 comment:

I was going to write a clever email detailing our first 24 hours in Geneva, Switzerland.  Instead, here are just a few highlights:

Sent the incorrect itinerary to our friend Heather who lives here.  She arrived to meet us on Monday around 11:30am, but we didn't arrive until 3pm or so.  Took a while to figure out how to call her on a pay phone.  Pay phone!  When is the last time you used one of those.

Geneva airport has a French and Swiss side.  Went back and forth between the countries trying to find the right Hertz.  Patrick straddled both countries for a few minutes.

The reservation we had for our rental car didn't exist in the system.  No cars were immediately available, and if we took a car that day, we were going to have to pay close to $1600 for 24 days - and for a small/medium-sized car.  Austin figured out the free wi-fi at the airport and sitting on luggage next to Hertz, reserved and paid for a car to pick up on Tuesday morning.

Finally made contact with Heather and met her!  Stuffed all our luggage and the 5 of us into her car, and went to her Swiss village of Crans.

Had some good local wine from the chateau/winery here in the village of Crans at dinner.

Patrick woke up at midnight and tossed and turned until around 2am.  He woke up this morning at 8:15am when Austin and I got up to go back to the airport for the rental.  Patrick has a headache, and a fever.  Heather walked down to the pharmacy to get a thermometer and kids' ibuprofen.  He is still pretty docile and not feeling great, but not grouchy.

We might take a boat across Lake Geneva to a French village to stroll around.  No big plans until Patrick feels better...
Posted by Katy, Planet Perspectives at 5:07 AM 1 comment: