A good friend of mine whom I met in Senegal 10 years ago just got me in touch with a local organization in Silver Spring, MD that is having a fundraiser dinner on October 10. If you are interested, please do sign up to go. And if not, consider a donation. It sounds like a great organization and a fun event. I'm including some information from a lovely brochure that the Executive Director, Tim, sent to me. Here's some info from the brochure:

Advance sales only! All tickets must be purchased by October 3, 2008.

Please join us for our
THIRDANNUALFALL FUNDRAISER
on behalf of Kenya Connect!
wonderful things happen when kids connect!

• WHO ARE WE •
Kenya Connect is a U.S. and Kenya based non-profit organization founded in 2002. Our mission is to promote cross-cultural exchange and grassroots community development through the establishment of personal and service oriented relationships between Western and African children. Kenya Connect is governed by a Board of Directors.

• WHAT WE DO •
Kenya Connect gives Western and African children the opportunity to strengthen leadership, communication, and academic skills, to establish lasting global friendships, and to be personally involved in projects that improve schools and communities in East Africa. We also provide American and African adults the
opportunity to learn from their children that we are far more alike than we are different, and that we can work together to improve lives.

• HOW WE DO IT •
Kenya Connect introduces American students to African culture through communication arts. We help students in rural African communities and the U.S. establish personal relationships by becoming PenPals, and also involve American children directly in fundraising and community development projects to improve school facilities in Africa. All of the funds raised by Western children go directly to our enrolled
schools in East Africa. Our operations are funded primarily by our founders, individuals, civic organizations,and foundations.

• WHY WE DO IT •
At Kenya Connect, we believe that children who know and care about their world and the global community are better equipped as adults to promote cultural exchange and understanding. By providing children with important philanthropic and service opportunities at an early age, Kenya Connect is able to enrich lives, inspire global cooperation, and lay the groundwork for peace and prosperity while simultaneously improving conditions on the ground in Africa.

• WHAT WE HAVE ACHIEVED •
Students in 31 African and over 70 U.S. and European schools have exchanged over 37,000 letters. Between 2002 and 2008, American children and individuals have raised almost $200,000 for community projects. We estimate that more than 70,000 East African children, teachers, and parents have benefited from our programs.

• HOW YOU CAN BECOME INVOLVED •
-Involve your school or youth group with our PenPal and School Sponsorship Programs.
-Make a tax deductible donation or hold a fundraiser to support our mission.
-Volunteer your time and talent. We need you to help make a difference in the world.
Kenya Connect is working to make significant, lasting changes that contribute to peaceful, productive globalization. We believe that the experiences we provide children are precisely those that inspire them to become “world citizens” to fulfill their potential, to value work, to celebrate and be enriched by diversity,and to grow into adults for whom acts of generosity and the spirit of sharing are a way of life!

Trip Advisor, at http://www.tripadvisor.com/Causes is letting people vote for how to give away $1,000,000 to one of 5 organizations. On their website they write:

Why we're doing this:

With over 15 million reviews and opinions from real travelers, TripAdvisor believes in the power of the collective voice.
We also believe you can leave more than your footprints behind when you travel – by making a difference in your community and the places you visit.

Sorry I can't figure out how to make a link, but go to http://www.tripadvisor.com/Causes to vote. And let your friends know by sending them to my blog, or directly to the site. Thanks for helping to donate a lot of money to a worthy cause.
Posted by Katy, Planet Perspectives at 3:33 AM No comments:

Little Bit of India in Benin 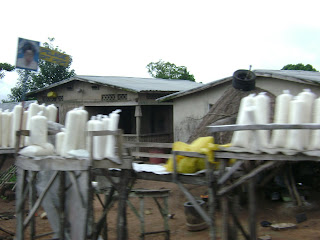 Unwittingly, I immersed myself in Indian culture and history yesterday while in Benin. We started the day early in Parakou, the largest city in northern Benin. By 7am we were on the road to the economic capital of this West African nation. The first hour or two of the trip on well-paved road gave me a chance to dive deeper into the book I started a few days earlier, called Red Earth & Pouring Rain by Vikram Chandra. Though the book is set primarily in Hindustan, modern India, and the United States, the title would have been apt for the Beninois countryside in late September. The earth here is quite red, a dark, wet, terracotta red. As it is currently the end of the rainy season, we have seen our share of pouring rain in the last week. Dark clouds above the Parakou-Benin highway threatened rain for hours.

While reading my Indian book, I would look up from time to time to see the villages hugging the two-lane road, and wondering at products for sale as we passed. Homemade charcoal filled bags in one village. The next was filled with enormous dirty brown-skinned manioc, a starchy root vegetable. Green oranges, carefully peeled around and around piled up for sale to refresh the passengers of bush taxis. And later, the manioc flour in clear plastic bags, sold to make what? Our driver explained it would make a paste to eat. Like Cream of Wheat? Like reconstituted mashed potatoes? Fou-fou? We never quite figured it out.

A long seven hours were spent twisting and turning on the straight highway to avoid the goats sauntering across the road, the deep potholes, and swerving to avoid others approaching us, doing the same. Unlike many of the big trucks, we never jack-knifed, nor ended up in a ditch, nor crashed in a head-on collision. And unlike the smaller bush taxis, we never ended up stuck propping up the wheels with crumbling rocks to change a blown-out, flat tire.

Four of us planned to go out to dinner in Cotonou, rather than eating at the Ibis Hotel. We chose the Indian restaurant nearby, just a short drive away. As the first customers, we received the doting attention of our Beninois servers, and the Indian owner as well. Thinking back to all the delicious food I was reading about in my novel, I looked forward to trying some new dishes. The owner did not disappoint us. He gauged our level of tolerance for spicy food, our interest in various meats and fishes, and made excellent suggestions. We all left the restaurant fat and happy.

The French teacher in me wants to also share a little joke from dinner. You need to know that the local beer in Benin is called Beninoise. (Beer is a feminine noun, thus the "e" on the end) So the conversation went as follows:

male American (not expecting a follow-up question to his order): Pardon?

Some laughter. Discussion follows about the attractiveness of the female server...
Posted by Katy, Planet Perspectives at 7:38 AM No comments: 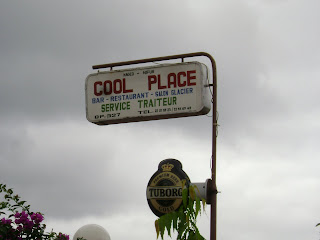 I have traveled to 12 countries in Africa over the last 11 years...and I can still be slightly startled by one's stance on privacy. I was traveling earlier today from Parakou, in northern Benin, headed south on the main road to Cotonou. We stopped in a town called Bohican, where a fairly modern 4-story hotel faces a self-described bar/restaurant/ice cream/catering service called "Cool Place." Emerging from some rough roads and near head-on collisions with big rigs and goats, we stretched our legs, and trotted over to the bathroom, a one room W.C. with a toilet and a sink. I heard a lot of splashing in there; it sounded like someone was taking a shower. We all stood around our table as cold Coca Cola was served in the old-fashioned glass bottles, anxiously shifting from one foot to the other, to see who would make the nonchalant sprint to the bathroom when it was vacated.

One of the waitresses came over to me, the only woman in our group of nine Americans, and told me to go knock on the door. I did, and a woman in only her panties opened the door and motioned to the toilet. Realizing that the woman was trying to share the only available bathroom with me, and I had already seen her nearly naked, I decided quickly it would probably be rude to turn down her offer. The toilet seat was wet with clear water. I guess while she was getting water from the sink and putting it in a plastic bucket with a plastic cup, she must have splashed a bit while taking her "bucket shower." So I quickly squatted over the toilet, as there was no toilet paper nor towels to wipe off the seat, rinsed my hands in the sink, and vacated the room. It seemed perfectly normal to her to share her space with me, and I guess her sense of privacy is different from mine, although I guess mine has changed a bit over the years as well. I'm not sure I would have been comfortable doing that 10 years ago.

I have a few pictures of the "Cool Place" to share, though not of the bathroom, of course! I just need to wait until I can download the pics on Monday when I'm back in the USA.

And if you're going to Africa soon, consider buying Lonely Planet West Africa. I actually have time to go sight-seeing tomorrow and I can't believe I didn't bring my copy from home! Too bad two-day shipping wouldn't work from the US warehouses to Parakou, Benin!


Posted by Katy, Planet Perspectives at 5:38 PM No comments: